On March 2nd of each year, Texas celebrates its own independence day. On that day in 1836, 56 mostly Anglo settlers in Mexican Texas declared Texas to be independent from Mexico, and published a Declaration of Independence to that effect.

The most well-known battle during the Texas Revolution was the Battle of the Alamo. Many people know this battle through popular culture – either from their classrooms as children, or one of the many movies produced dramatizing the battle. The Texian combatants in the Alamo, however, fought not for the independence of Texas, but rather for a return to the Mexican constitution of 1824.

All that aside, today’s post weaves together a number of threads in Special Collections, beginning with Senator John G. Tower reading William Barret Travis’ Victory or Death letter sent from the Alamo. This audio recording is one of many available thanks to the expertise of our colleagues at Southern Methodist University – which, thanks to Senator Tower’s daughter, Jeanne, possesses the specialized equipment to digitize the magnetic based audio recordings in the Tower collection.

Senator Tower graduated from Southwestern in 1948. After attending graduate school and teaching at the university level, Tower was elected as Senator from Texas from 1961 until 1985. Special Collections holds the Senator’s papers. The recording of Senator reading the Travis letter is a very small part of the collection, which comprises over 1,000 linear feet.

There are many famous recordings of this letter – even one by Willie Nelson – but Senator Tower’s reading is the best. He has the right cadence, and the right accent, to sound “Texan,” but not be difficult to understand. It is also appropriately serious, conveying the urgency of Travis’ letter.

William Barret Travis commanded the small Texian force that held the Alamo, a decommissioned mission in San Antonio. That small force defended the mission against a much larger Mexican force in the Battle of the Alamo. The battle – or more properly – siege – lasted thirteen days, beginning on February 23, and ending on March 6. By the date of the letter – February 24 – Travis knew that unless reinforcements arrived to assist the small force he commanded the Alamo would fall and all the soldiers inside would be killed by the far superior Mexican forces. As a result, he sent the letter Senator Tower reads above, perhaps the most rousing writing from the Texas Revolution. The original text, now at the Texas State Library and Archives is presented here:

Upon receipt of Travis’ letter, it was ordered by the revolutionary government to be printed. The firm of Baker & Bordens, as the “Public Printer” for the government, printed the letter on February 27th, in 300 copies. It is this printed letter, along with the printed Declaration of Independence (also printed by Baker & Bordens) that are of prime importance in the printed matter of the Republic of Texas.

The firm of Baker & Bordens has an intriguing connection to Special Collections, discussed on this blog on September 26 of 2017. We have a payment voucher signed over to Gail Borden, Jr.; as well as a single issue of the Telegraph and Texas Register, printed by Baker and Bordens.

As I mentioned above, the printed Travis letter and the Texas Declaration of Independence are of prime importance to print culture and history in Texas. These two documents are also among the most rare printed Texas documents known. Due to their importance and rarity, these items have astronomical values on the rare book market – if one can find a copy.

And so when more than a dozen copies of the printed Travis letter arrived on the rare book market in the 1970’s and 1980’s, many collectors and scholars of printed Texas material were suspicious. However, in their rush to acquire what was, until then, an unobtainable item, collectors and libraries failed to do the due diligence that should be performed when large sums of money change hands. In short, the copies that arrived on the market in the second half of the 20th century were fake.

It was this scandal – discovered by W. Thomas Taylor and detailed in the book Texfake – that brings us to our third connection to Special Collections in this post.

W. Thomas Taylor, through close examination of the Texas Declaration of Independence and the printed Travis letter, was able to definitively conclude that many of the copies of both of those documents (among others) was fake. Who created and passed the fakes, though?

Jenkins was incredibly well known in the rare book world – and especially so in Texas and Texana. He published his first book the day he graduated high school, and was seen as a brilliant, if manic, scholar and bookseller. Jenkins dominated the market for Texana in its golden age – and he sold a sizable amount of material to Ambassador Edward A. Clark, who gave his collection of Texana to Southwestern in the mid 1960’s.

Another purchaser from Jenkins was John Peace, who gave his collection to the University of Texas at San Antonio. W. Thomas Taylor notes that Peace purchased one of the fake Travis letters, a scan of which follows thanks to the generosity of our colleagues at the UTSA Special Collections: 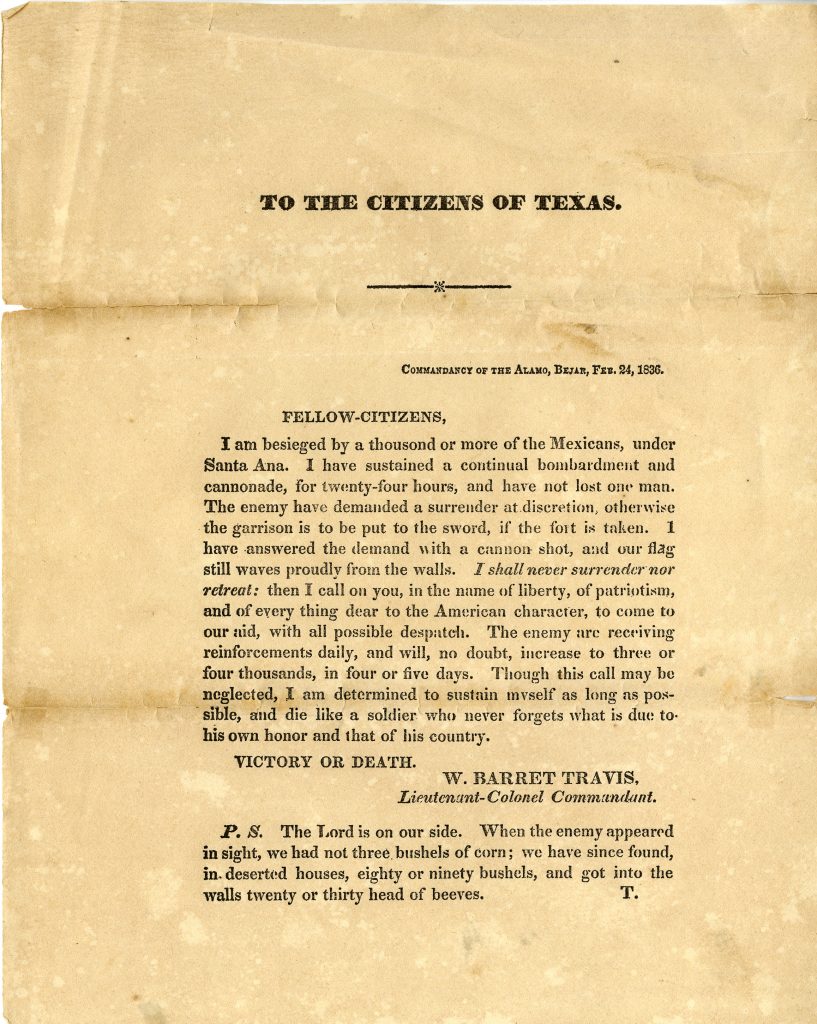 To the best of my knowledge, the only legitimate copy of the printed letter is held at the Beinecke Library at Yale University – that copy having been Streeter’s personal copy, identified as such in his bibliography. W. Thomas Taylor states in his essay about the Travis letter that the Beinecke copy, as well as the copy at the Texas State Library are the only two legitimate copies of the letter. However, the Travis letter at the Texas State Library has been missing for quite some time.