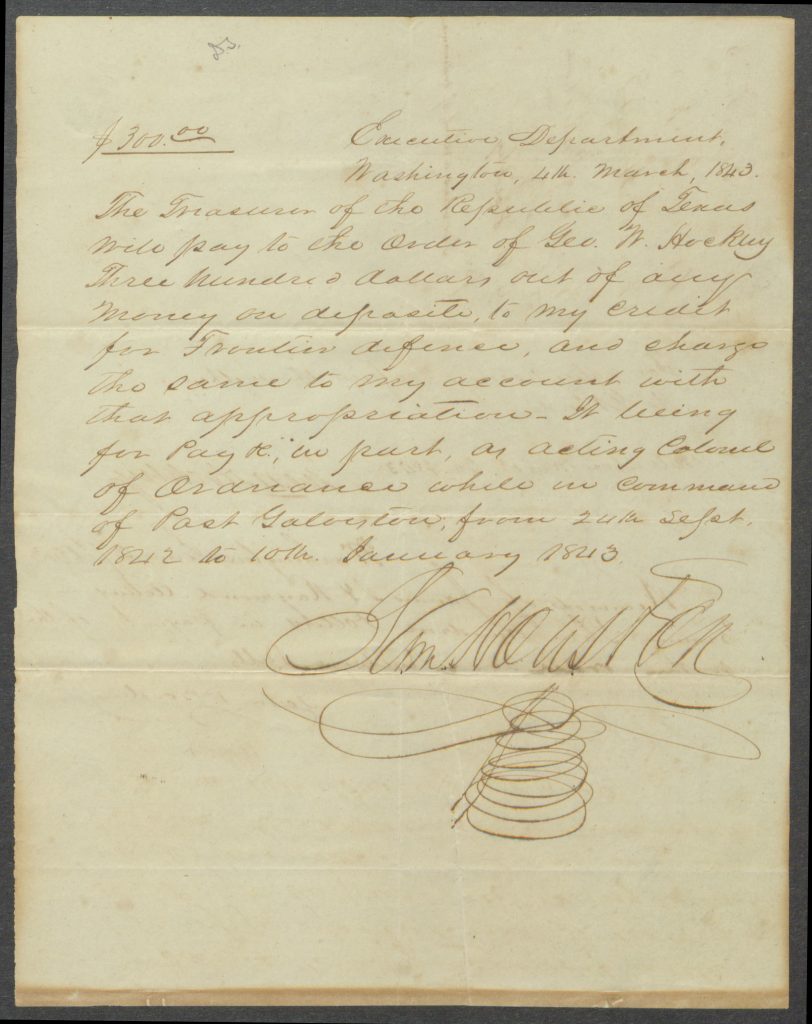 A few weeks ago in a post about the Tower Musket, I promised a post about a payment voucher made out to George W. Hockley. The voucher, pictured above, is interesting for several reasons. The voucher is connected to several of the most important people in the Republic of Texas, and it has a connection to Edward A. Clark and Carl Hertzog.

Perhaps the most immediately obvious part of the document is the large signature of Sam Houston, signing in his capacity as President of the Republic of Texas. The voucher itself is in a secretarial hand, but the oversized signature is definitely Houston’s. I think his signature is a good analog for the man. The text of the voucher is as follows:

Executive Department,
Washington, 4th March, 1843
The Treasurer of the Republic of Texas
will pay to the order of Geo. W. Hockley
Three Hundred dollars out of any
money on deposit, to my credit
for Frontier defence, and charge
the same to my account with
that appropriation. It being
for Payment, in part, as acting Colonel
of Ordinance while in Command
of Post Galveston, from 24th Sept.,
1842 to 10th January 1843.
[Sam Houston]

I touched on Hockley’s life briefly in the post about the Tower Musket, and I would like to expand on that some here. Hockley and Houston knew each other in Washington, D.C., where Hockley served as a clerk in the commissary division of the War Department – where he met Houston. After Houston’s election as Governor in Tennessee in 1828, Hockey moved to Tennessee – and later followed Houston to Texas in 1835. Upon Houston’s election as commander in chief of the army of the Republic of Texas, Houston appointed Hockley as his Chief of Staff. After the battle of San Jacinto, Hockley served as  colonel of ordinance and Secretary of War. (Recall that Hockley, as Colonel of Ordinance, signed the contract with Tryon of Philadelphia for the muskets for the Army of the Republic of Texas). This voucher likely was in payment of Hockley’s salary as Colonel of Ordinance in Galveston. It was signed by Houston, then given to Hockley. At this point, the story behind this voucher expands to include two other notable individuals associated with Republic era Texas. 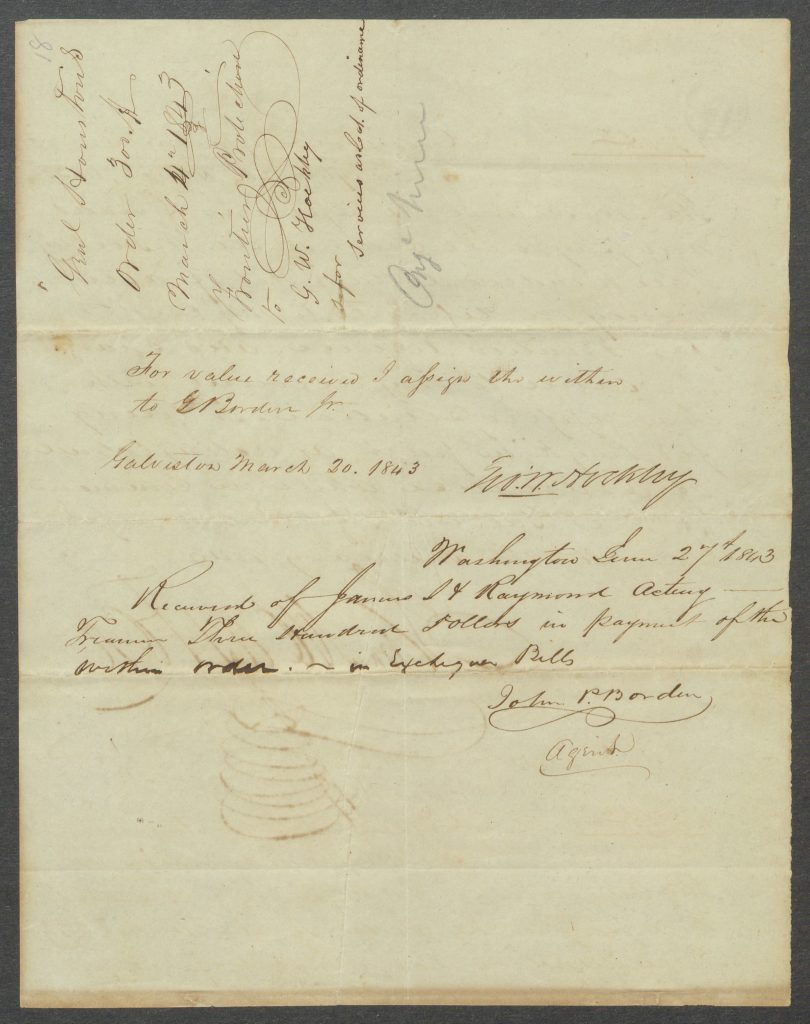 What you see above is the reverse of the voucher, which reads:

The first assignee, Gail Borden, Jr., (with Joseph Baker and Thomas H. Borden) was the founder of the first permanent newspaper in Texas, the Telegraph and Texas Register. Interestingly, we hold a single issue of this very rare newspaper in Special Collections. Borden and his associated print shop (Baker and Bordens) was the official “public printer” meaning his shop printed all of the materials for the government of the Republic of Texas, and in this role, Gail Borden was partially responsible for the official printing of 1,000 copies of the Texas Declaration of Independence. However, the Borden name is likely known to many readers of this blog, as it is the name on many of the dairy products we see in Texas.

This lasting success was thanks to Borden’s inventing  – an activity that led him to invent a new process for condensing milk, initially establishing plants in Connecticut, and later his first plant in Borden, Texas. His success in condensing milk allowed Borden to expand his dairy business into the one we know today.

However, the interesting connections highlighted by this voucher do not end at Hockley and Borden – but extend into the 20th century. We know that Edward A. Clark had this voucher in his possession by 1964, as he commissioned Carl Hertzog to print a Christmas keepsake for that year with an essay by Clark about the voucher, as well as a facsimile of the voucher itself. 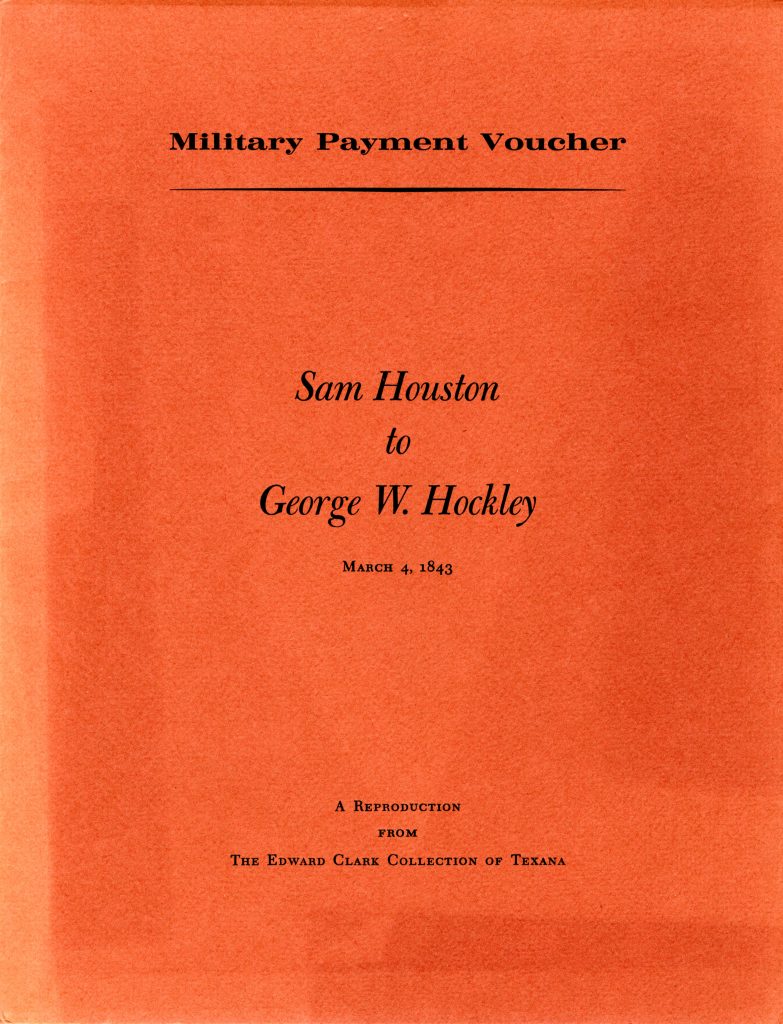 The image above is of our badly sunned copy of this Christmas keepsake, dated December 20th, 1964 and signed in type by Edward and Anne Clark. Inside in two colors are two pages of Clark’s words about the voucher, as well as a sepia facsimile of the voucher. In his essay, Clark gives some of the information presented above and connects his acquisition of the voucher to his own interest in Texas history. Hertzog’s printer’s device appears on the inside of the rear paper wrapper of the keepsake. Al Lowman gives the keepsake no. 329 in his Printer at the Pass. In Dorothy Sloan’s catalog of the Library and Work of Carl Hertzog, the keepsake is given numbers 256 and 257.

We assume, then, that Clark gave the voucher to Southwestern at about the same time he donated his collection of Texana in 1964, although he certainly had it in his possession long enough to commission Hertzog to produce a facsimile of the voucher.

That is the fleshing out of the voucher I promised a bit ago, and it is certainly not unique in being a connecting point between seemingly disparate parts of Texas history and printing – and we hope to be able to share it with you in person.