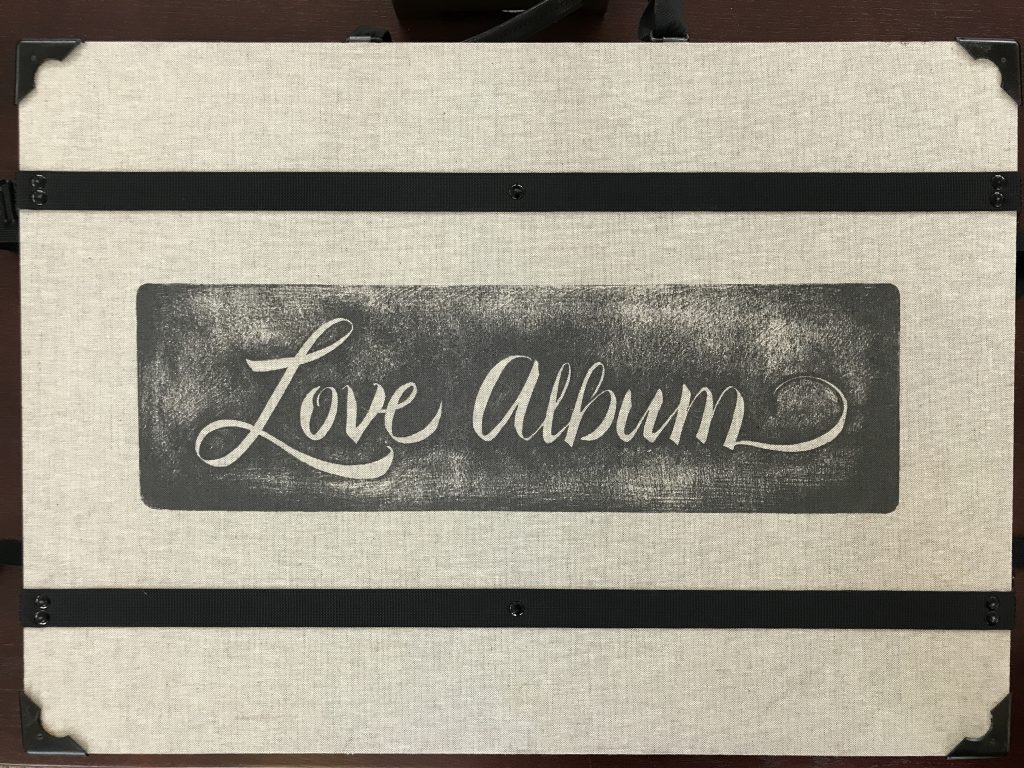 This object is one of the most  remarkable things we have in Special Collections. I don’t recall when I first encountered it – I suspect it was several months into my first year when I retrieved this from its perch high on the shelves in one of our storage areas.

I love this object so much that I’ll admit to having a hard time writing about it. One’s connection to it is immediate, deep, and emotional – it really has a strong sense of nostalgia.

Retrieving this object is no mean feat. Altogether, I estimate it weighs between 60 and 70 pounds, and is not particularly small. The enclosure lets you know that this is something special – and I want to tell you why it’s so special.

Love Album is a late 20th century object – created in Massachusetts in 1985. The object itself is made to look like a steamer chest, or a suitcase. It has nylon webbing and plastic buckles, as well as leather handles. We don’t really use these, but they add to the effect.

The choice of a chest of suitcase is apt for the object – as contained inside are stories and items related to the childhood of Joe and Ruth Love – both graduates of Southwestern. This is acknowledged on the title page: 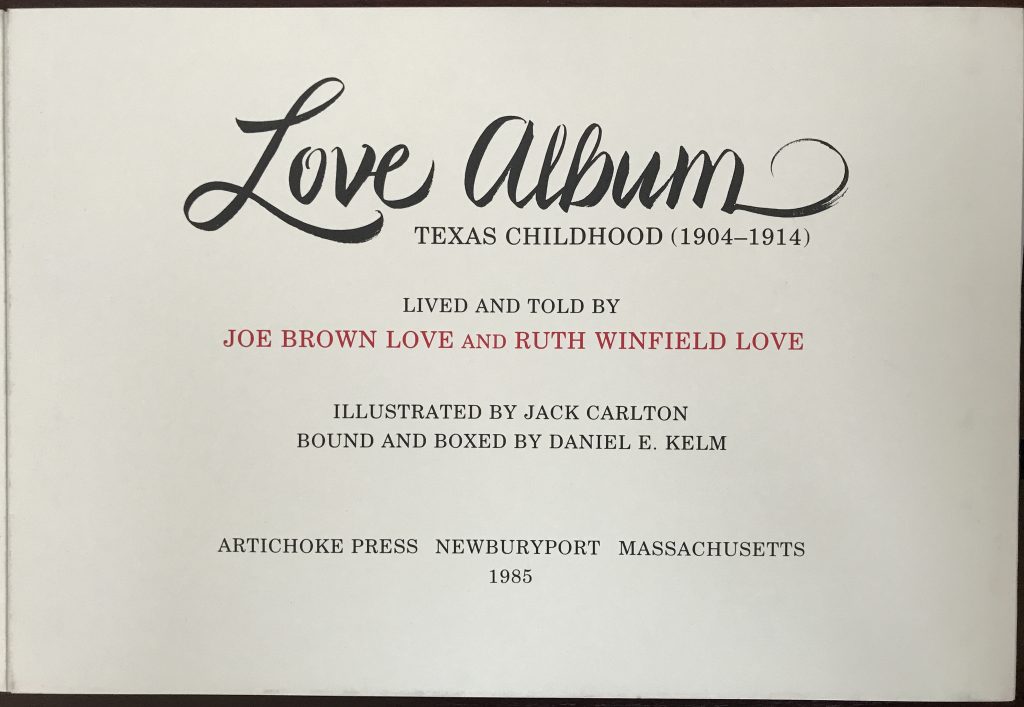 The book part of this object is contained within the container, and is bound accordion style. It has a stylized logo on the front board, seen here: 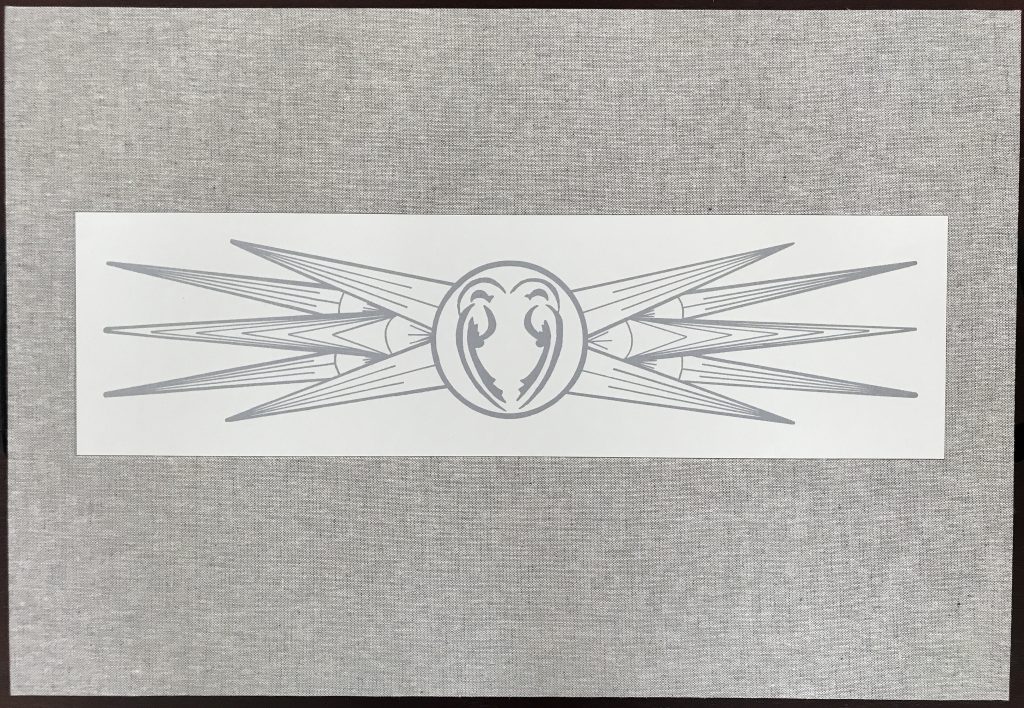 After the title page, we are greeted with the first of several serigraphs – these of the dedicatees for the book: 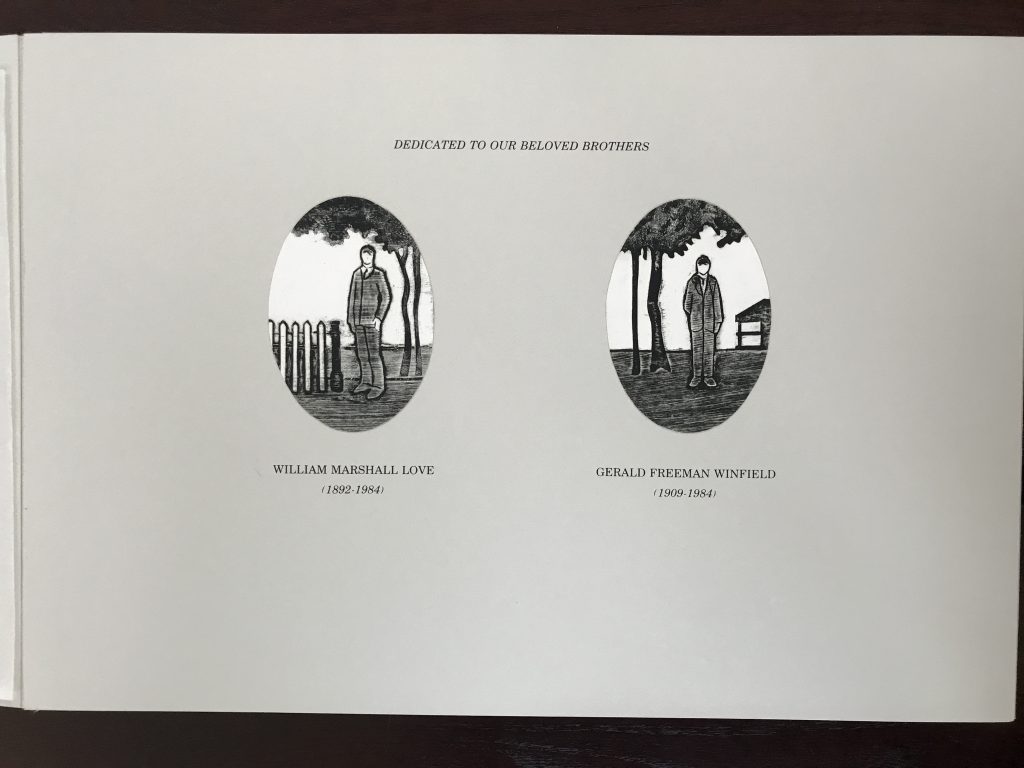 Followed by a series of family stories with charming illustrations. The text on each page is silkscreened from the handwritten stories of Joe and Ruth, adding an even greater immediacy to the object. Take, for example, this story about a train, with a lovely illustration:

Or this story about piano lessons. The illustrations are in three parts:

I think the most compelling image is that of the airplane that landed when the local children were at recess:

The endpapers (if you can call them that in an accordion fold book) are collotypes from family photographs:

I bet you’ve noticed that I’ve used the word “object” a lot with this item. Well, it’s more than a book, and more than a thing that looks like a suitcase. It also has small pieces of family memorabilia in both the lid 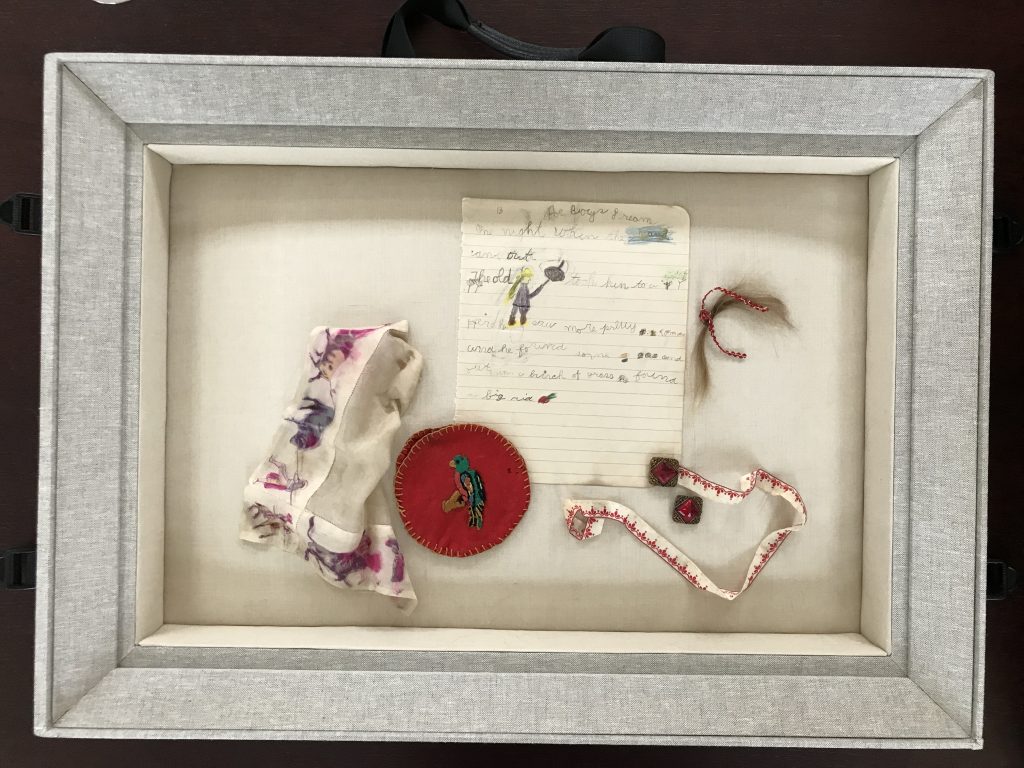 And in a hidden tray underneath the book: 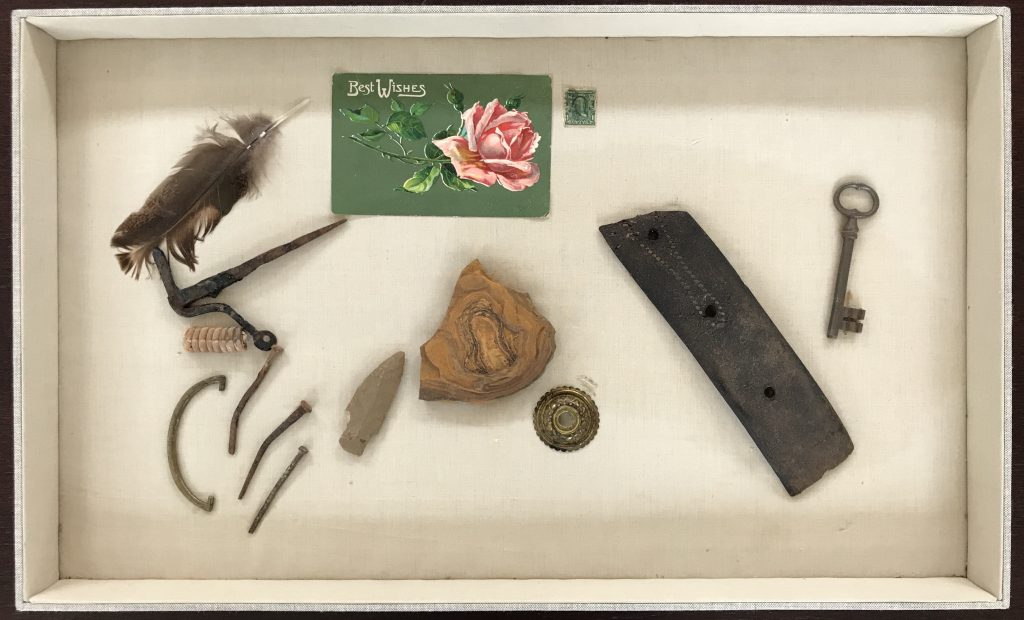 The objects, as well as the books creators and processes, are explained in the colophon: 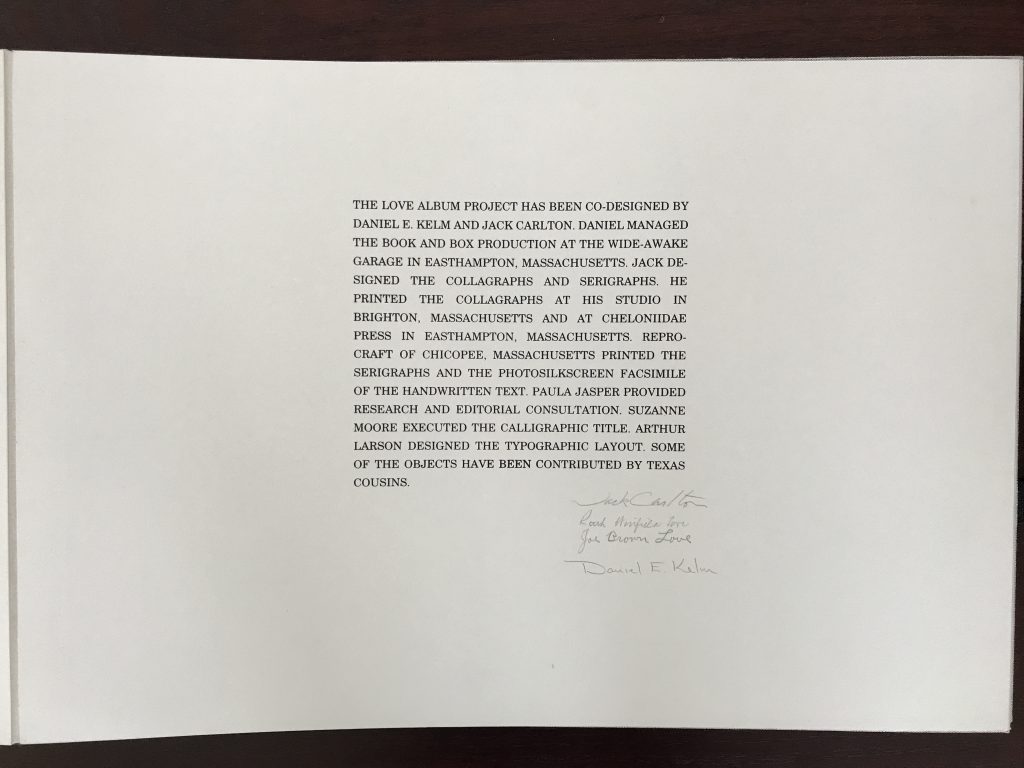 We know that only ten copies of the object were made, and five of those are held by libraries. The list of holding libraries are: Southwestern University, University Texas at Austin, Bridwell Library (SMU), Houghton Library (Harvard) and Smith College.

Why did we end up with such a remarkable and rare object? Well, the Loves were longtime residents of Williamson County, and Georgetown – and many of the family members (including Joe) went to Southwestern. We know this from the presentation card accompanying the object – names with years after them indicate graduates of Southwestern: 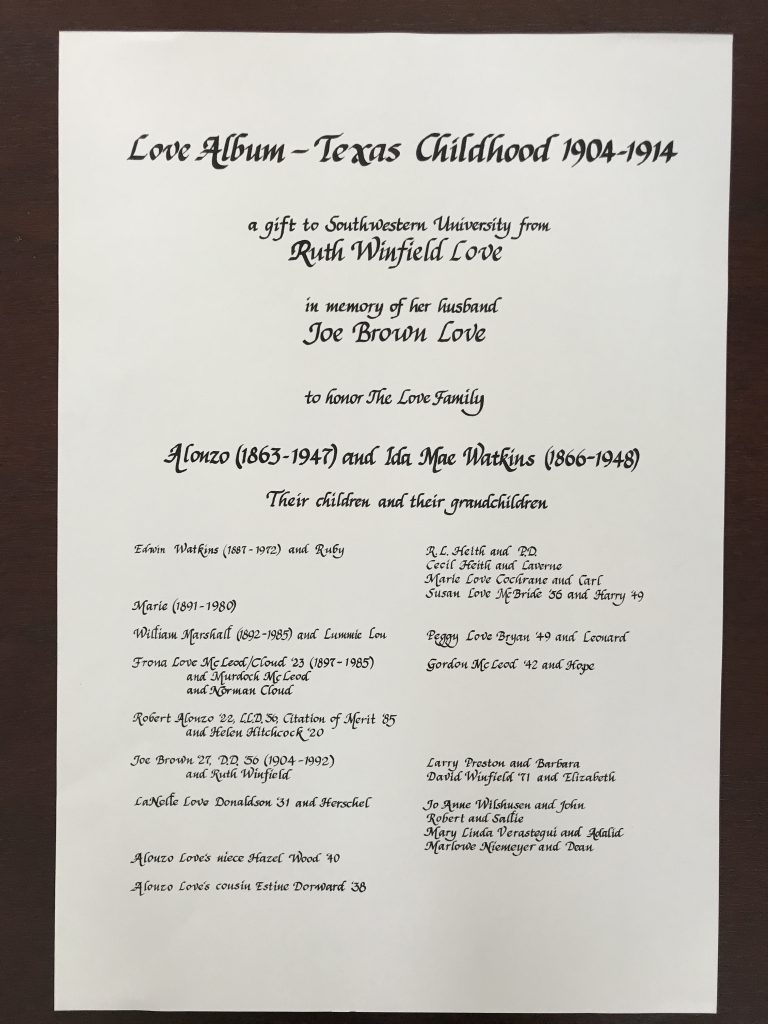 I feel like I have not done this remarkable object justice. You just don’t get a sense of scale and size online! I hope other libraries will share images of their copies – especially the objects in the trays – so that we can get a fuller sense of what went in to each copy.

I also cannot recommend strongly enough coming to see this in person – it’s a delight. Just let us know ahead of time – remember how heavy it is!