One of the joys of my job has been developing an unabashed love for the work of Carl Hertzog. We have a wide array of his work, and are currently processing a gift that will significantly enhance our holdings of Hertzog’s work.

I want to focus here on what has been described as Hertzog’s Gutenberg Bible: The King Ranch. This book is arguably the magnum opus of Hertzog’s career, and is certainly among the best Texas books of the 20th century.

The King Ranch is currently the largest ranch in Texas, comprising over 1,200 square miles (larger than the entire state of Rhode Island). In 1950, the Kleberg family (direct descendants of the ranch’s founders) began planning for the centennial of the founding of the ranch. These celebrations were planned to include a book about the ranch’s history. Hertzog and his frequent collaborator, Tom Lea, were approached to respectively be designer and printer (Hertzog), and author and illustrator (Lea) for that history. Lea was a surprising choice, as the most likely author – J. Frank Dobie – actively lobbied the Kleberg family for the commission to write the history of the ranch. However, Richard Kleberg, Sr. dismissed Dobie as “a pompous academician who likes to play cowboy.” Also, Lea’s work came to the notice of the Kleberg family through Lea’s recent work painting the livestock industry for Life magazine.

What concluded as one of the greatest works of Carl Hertzog began as a modest history of the ranch, to be published in celebration of the centennial of the founding of the ranch in 1853. The initial proposal planned for the finished book to be about the same length and size of Fort Concho and the Texas Frontier, which Hertzog also designed. An initial contract was signed to this effect in 1951, which estimated production costs for the book at $17,000.

As Lea began his work on the book, his interest in the project grew as he came to understand how important this history would be not only to the ranch, but also to ranching history in general and Texas history. Hertzog, and the Kleberg family, also understood that the book would be important. As a result of this understanding, Lea advocated for upgrading the quality and length of the book, and proposed a deluxe, limited edition that would not be sold to the general public in addition to a trade edition of the book. The deluxe edition came to be known as the Saddle Blanket Edition.

The final deluxe edition book cost $65,000 to print (over half a million dollars in 2017). It consisted of 838 pages in two volumes, and contained 43 illustrations. There were 7 maps, 11 document facsimiles, and 63 pages of footnotes. The book – especially the Saddle Blanket Edition – was widely lauded for its design, which is perhaps the best work of the Lea/Hertzog collaboration.

The Saddle Blanket and the trade edition were physically similar – issued in two volumes in a slipcover. However, the Saddle Blanket Edition was bound in heavy crash linen, with a facsimile of the King Ranch blanket printed on the cover. The paper for that deluxe edition was made expressly for the book with a watermarked running W – the brand of the ranch. This brand is mirrored in the running W in the margin of the pages of the book. That brand in the margins changes shape over the pages of the two volumes as Lea desired the brand device to be made of brass rule for printing, as that better mirrored the organic brand.

The project was initially typeset in 16 point Centaur type by Monotype machine. Herzog laboriously inspected the typesetting page by page to avoid poor spacing and bad line breaks. Hertzog tried to avoid hyphenating the end of successive lines, and to this end he would laboriously shave the letters to fit more closely together to avoid hyphenation.

Our copy of the Saddle Blanket Edition is notable as it is a presentation copy to Edward A. Clark from Richard M. Kleberg, Jr. and Robert J. Kleberg, Jr., direct descendants of the founder of King Ranch, Richard King. The presentation note recognizes Ambassador Ed Clark’s work on behalf of the livestock industry, and his work as United States Ambassador to Australia. 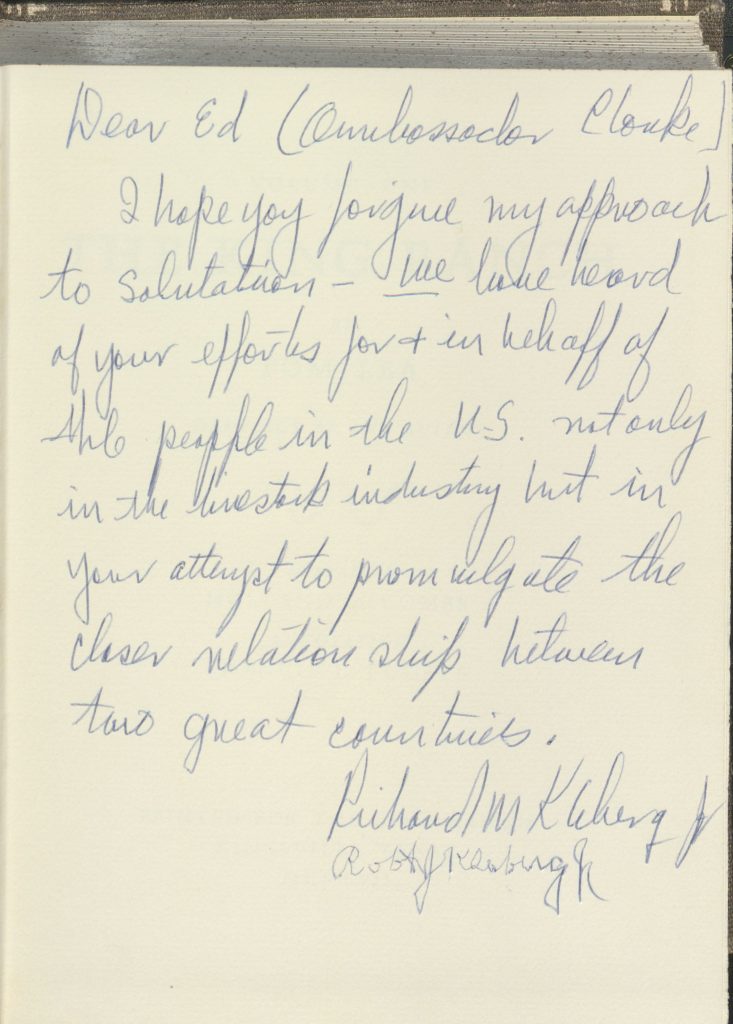 We also have an eighth printing of the trade edition of the book, from the library of Decherd Turner – whose library we hold here in Special Collections. That copy was a presentation copy from the Eby and Kleberg families to Turner upon his retirement from the Harry Ransom Center.

As a result of the importance of this work, we seek to collect material that increases our understanding of The King Ranch. The large card advertisement at the head of this blog post, measuring 122 x 32.5 cm is one of those items. We also have several other promotional materials, perhaps most interesting among them is a printed notice of the publication of the book, likely printed by Carl Hertzog. 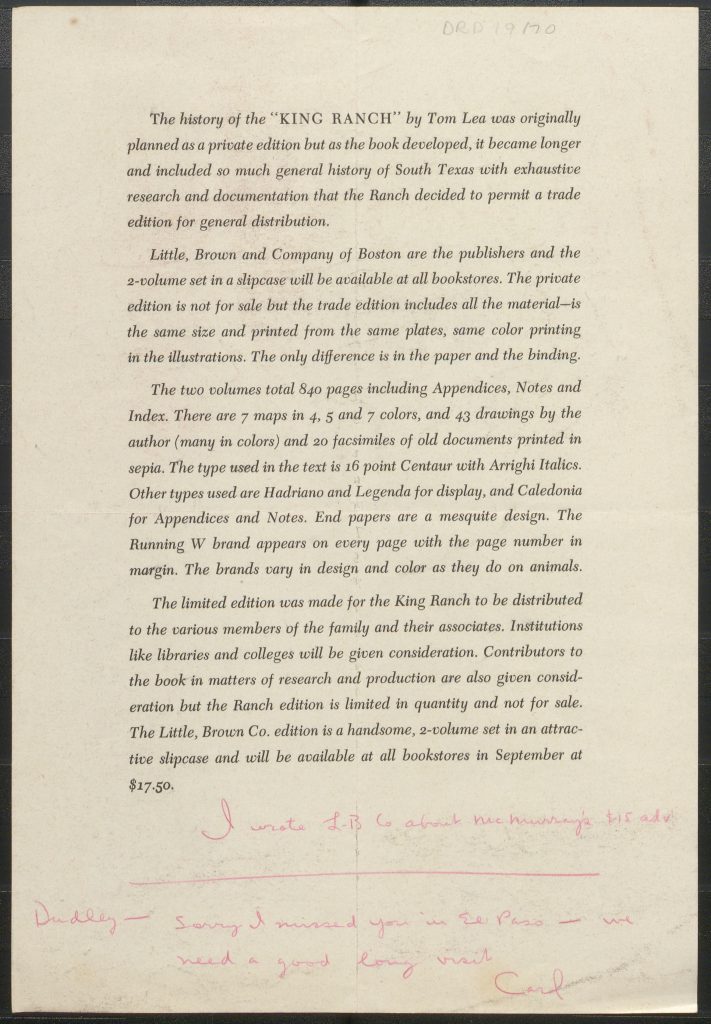 In pink pencil at the bottom of the page, Carl Hertzog writes:

The notice was sent to Dudley R. Dobie, J. Frank Dobie’s younger first cousin, and lifelong bookseller. The large advertising card at the head of this post also came from Dudley Dobie’s shop, further enhancing its connection to Special Collections at Southwestern.