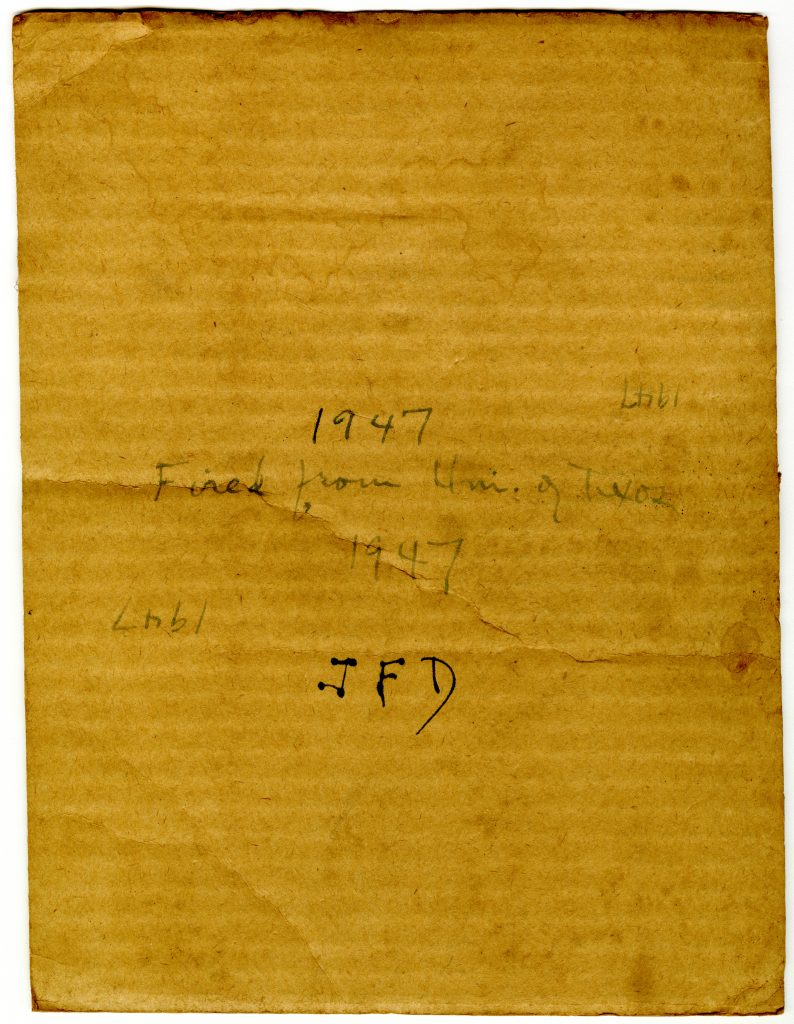 Last week we hosted Jeff Roberts and Vicki Tullius – the children of F. Warren Roberts. I brought out some of the great material Jeff and Vicki donated from their father’s library – outstanding Texana items, association books, and Tom Lea material. Perhaps the single most significant item in the collection is the unassuming sign you see above.

When we unpacked the Roberts collection last year, this piece of cardboard appeared to be packing material at first glance. However, I turned it over and was presented with the above sign. It reads, in Dobie’s hand, written with a fountain pen:

I had a suspicion about what the sign was used for, and discussed my suspicion with people knowledgeable about Dobie as a person. When Jeff and Vicki visited last week, I discussed that same suspicion with them, and based on their confirmation, I feel comfortable asserting that this sign was placed outside Dobie’s office in 1947 when he was fired from the University of Texas.

First, I want to point out that the sign has rain spots on it – only on the front – indicating it was exposed to water on only the front side. Second, notice the ink bleeds in Dobie’s initials on the sign – at each of these places his pen pierced the top layer of cardboard, demonstrating the vigor with which he wrote his initials on the sign. This either demonstrates haste, or anger – and the choice of cardboard is unusual for jotting a normal note.

The story surrounding his firing is much more complex than can be told in this post – but if you’d like more information, read p. 171-180 in Davis’ biography of Dobie.

This sign, then, represents one of the great turning points in Dobie’s career – the ignominious end of a thirty year career at UT.