This is the second of four posts highlighting especially notable material from the Llerena B. Friend collection – and this post is focused on the notable ephemera found in the collection.

Dr. Friend was a librarian by profession, as you recall. She was the first director of the Barker Texas History Center – and her work as a librarian shows itself in many ways in the collection. Her attention to collecting ephemera and other small works results in her collection today having material that is especially difficult to find. 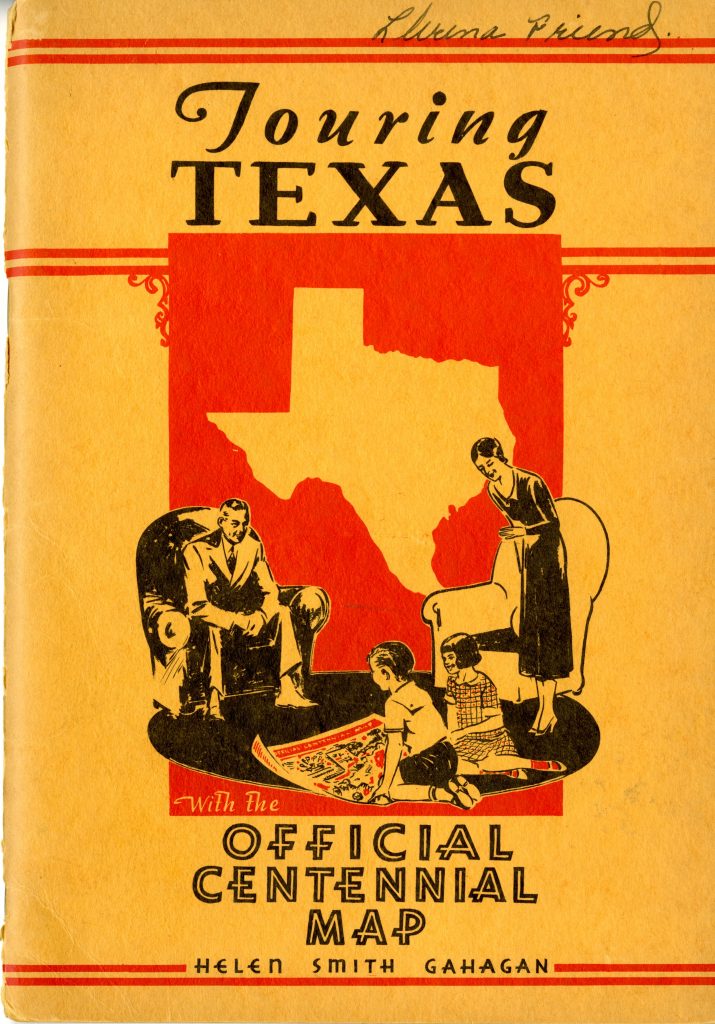 This small booklet, only 48 pages long, is a companion to the official centennial map issued by the Daughters of the Republic of Texas. In it, Gahagan provides engaging and breezy commentary on events in Texas history. Gahagan, the author, is most well known from the infamous 1950 US Senate election in California. Gahagan ran against Richard M. Nixon in a vicious campaign that placed Nixon on the national stage. 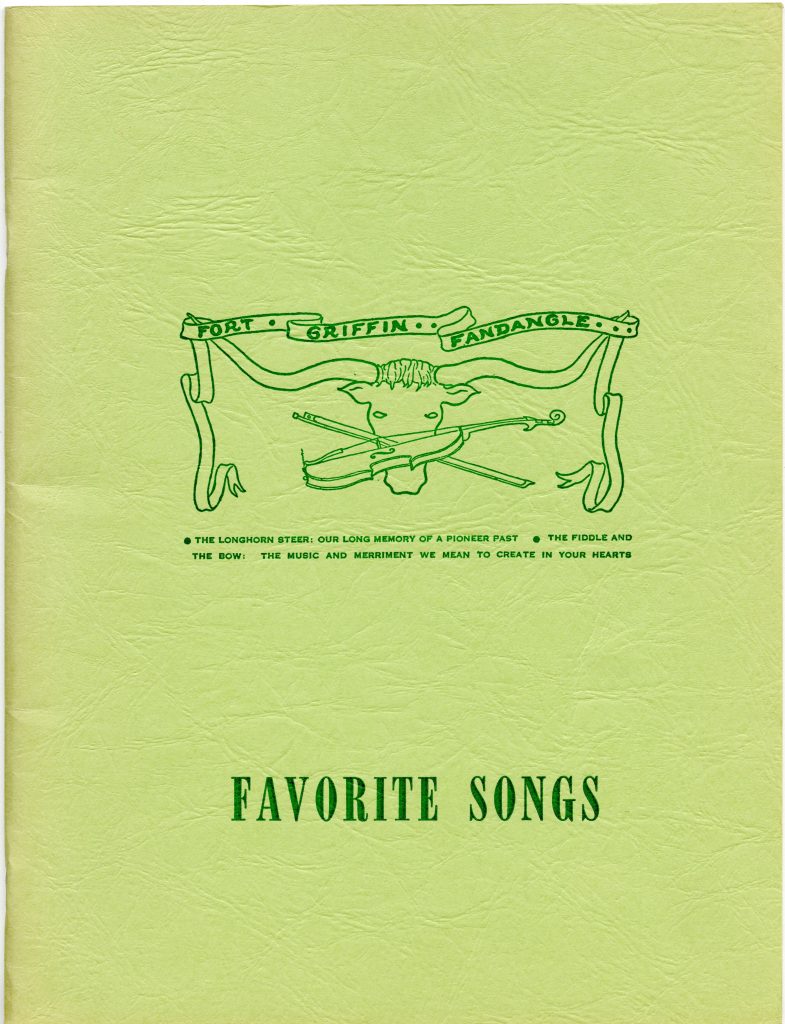 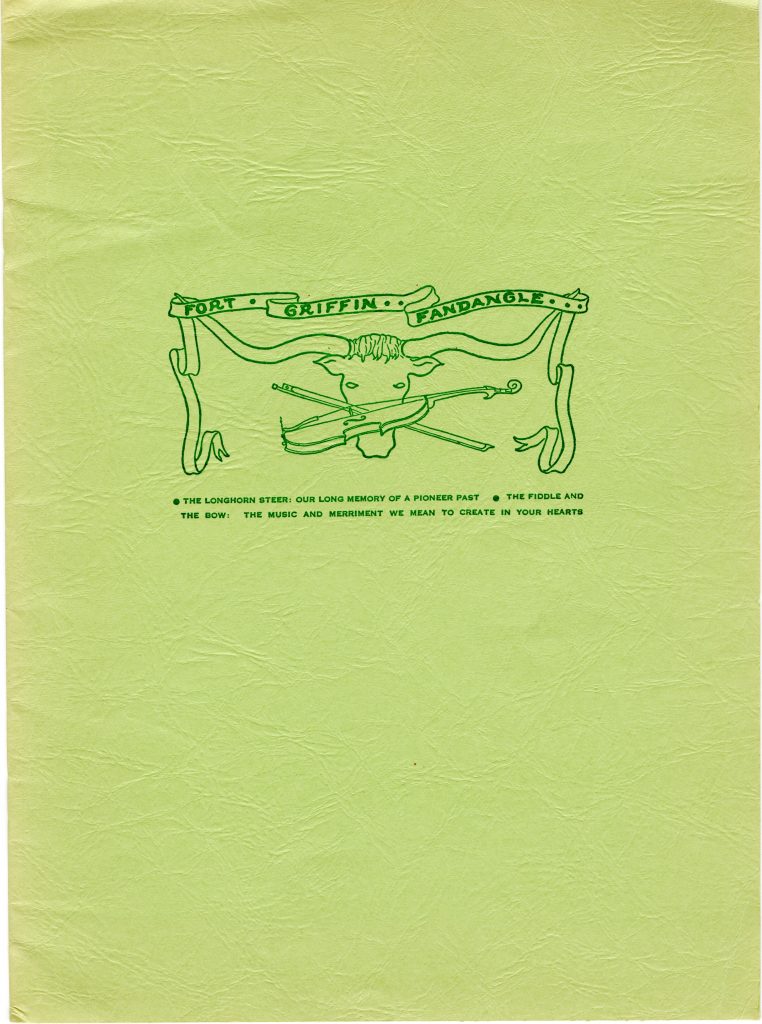 These two items are both related to the Fort Griffin Fandangle – though they are actually from the Fandangle, the oldest outdoor musical in the state of Texas, put on by residents of Albany, Texas.  Indeed, the Fandangle is a community affair: barbecue on the county courthouse lawn, prepared and served by residents; then the Fandangle itself, performed by community members and written by former Albany residents Robert Nail and Alice Reynolds. Indeed, one of the best books on frontier ranch life (which we will discuss in a later post) is set on and around the Lambshead Ranch, just outside Albany. Dr. Friend either attended the play in the mid 1960’s, or was a consultant to the production. Interestingly, her collection also includes a Carl Hertzog printed item from the Fandangle. These two items were likely given to attendees of the play – certainly the second of this pair. 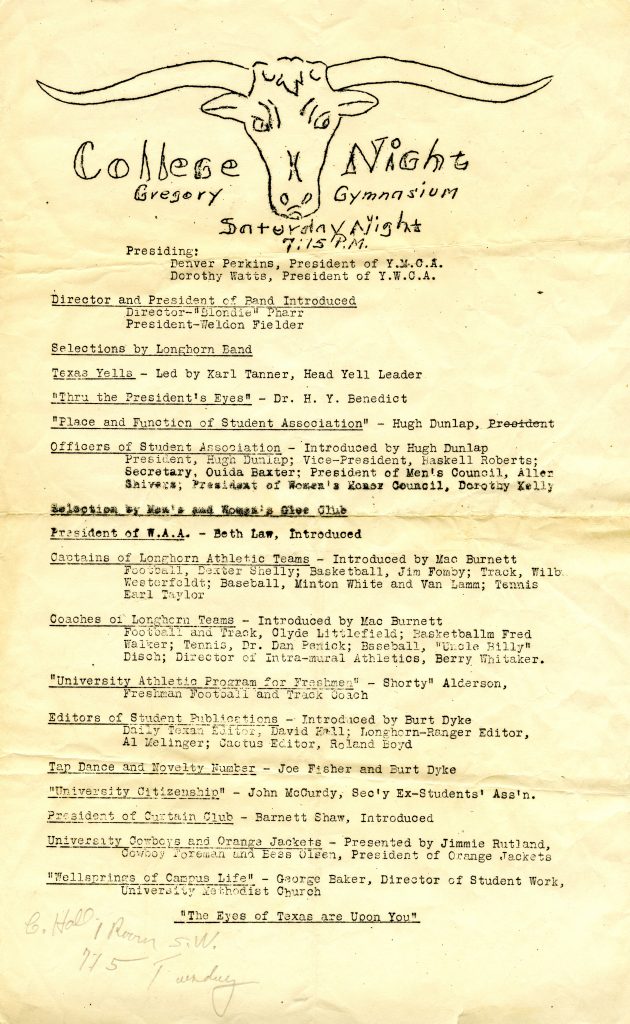 We’ve spent a fair amount of time researching this surprising piece of ephemera. It’s a mimeographed program for a gathering of UT students, without a year given – and it’s that year that has been the focus of much of our energy on this object. We can find the years of the presidency of H. Y. Benedict, as well as when “Blondie” Pharr was director of the band. Those two careers give us a date range of 1927-1933. Gregory Gymnasium opened in 1929, which would be the last year we can place Friend on the UT campus, as she was concluding her MA that year. Fortunately, we also know Hugh Dunlap was President of the Student Association in 1929, giving us a conclusive date. I seriously doubt another copy of this program survives – and it is very much to Dr. Friend’s credit that she kept it. 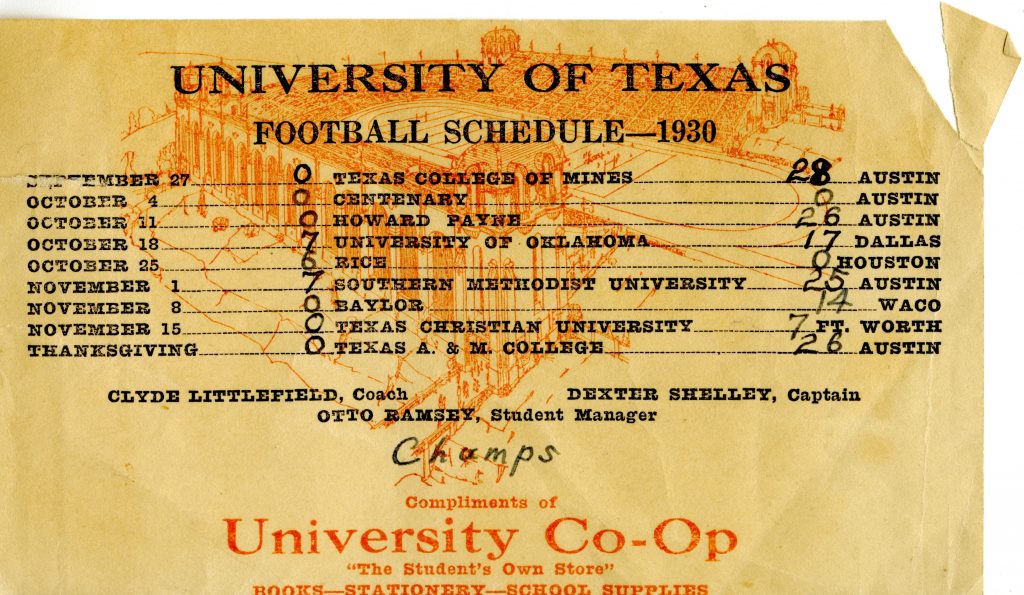 And finally we have this small football schedule from the 1930 season. If this schedule is any indication, Dr. Friend was quite a fan of UT football – assiduously recording the score of each game in the season, noting at the bottom that the team were “champs” that year. It’s also difficult for me to believe the football stadium at UT was ever that small!